Yesterday, we saw Thiruvallur, a suburb of Chennai (Madras) or Chennai Metropolitan Area (CMA), as it is called. Today, we are going to see a very important landmark in Chennai, Parthasarathy Perumal Temple, Thiruvallikeni.

Thiruvallikeni is my birth place, where I spent most of my formative years close to the Parthasarathy Perumal Temple. In fact, I was named Parthasarathy (for all religious purposes) for obvious reasons.

“Thiruvallikeni, later anglicized by the British as Triplicane literally means Thiru-Alli-Keni or sacred lily pond in Tamil. Triplicane is historically much older than the city of Chennai itself, with a mention in records as early as 8th century CE.

Triplicane is home to some of the tourist attractions of the city, such as the Vivekananda house, Marina Beach, Parthasarathy Temple and Triplicane Big Mosque.

Triplicane is famous for the various personalities it has produced over the years. Mathematician Srinivasa Ramanujan, Writer Sujatha Rangarajan, and cricketers M.J. Gopalan, Krishnamachari Srikkanth  all hailed from Triplicane. Subramanya Bharathy, a freedom fighter and poet, lived his last years in the house opposite Lord Parthasarathy temple’s western entrance.”

“Parthasarathy Perumal Temple is an 8th-century  Vaishnavite temple dedicated to Lord Vishnu, located at Thiruvallikeni, Chennai, India. The temple is glorified in the Divya Prabandham, the early medieval Tamil literature canon of the Alvar saints from the 6th–9th centuries CE and is classified as among the 108 Divya Desams dedicated to Lord Vishnu. The name ‘Parthasarathy’, in Tamil, means the ‘charioteer of Arjuna‘, referring to Lord Shri Krishna’s role as a charioteer to Arjuna in the epic Mahabaratha.

It is one of the very few shrines in the country dedicated to Krishna as Parthasarathy, with a prominent moustache and carrying a conch in his hand.  Krishna is seen standing with consort Rukmini, elder brother Balarama, son Pradyumna, grandsons Aniruddha and Satyaki.. The temple has icons of five forms of Vishnu: Narasimha, Rama, Gajendra  Varadaraja, Ranganatha and Krishna. The temple is one of the oldest structures in Chennai. There are shrines for Vedavalli Thayar, Ranganatha, Rama, Gajendra Varadaraja, Narasimha, Andal, Hanuman, Alvars, Ramanuja, Swami Manavala Mamunigal and Vedanthachariar. The temple subscribes to Vaikhanasa agama and follows Thenkalai tradition of Sri Vaishnavas.”

I had the tagline “Where do you want to go?” for some time.

I intended whether we aim to escape from the four-fold miseries of birth, death, old age and disease by going back to Godhead or continue in material existence.

It is obvious that all of us prefers to go back to Godhead.

The natural tendency of all living beings is to enjoy. But the living beings do not how to enjoy without getting entangled. This is the reasons for all the suffering.

In modern times, we have only very limited people who lead a perfect ideal life with lofty principles.

These people often had to undergo untold suffering for the welfare of the entire human society nay all living beings by sacrificing their own material comforts.

One such person is Nikola Tesla, considered as the man who invented the twentieth century and a forgotten genius of electricity.

We owe a lot to him:

He holds a record of at least 300 patents in his name.

He also had photographic memory, excellent poetic and arts sense, talented billiards player and a voracious reader apart from being a celibate, unmarried for his life of 86 years and an ardent supporter of vegetarianism.

But his life ended while being a recluse in a hotel room living in obscurity and in debt. 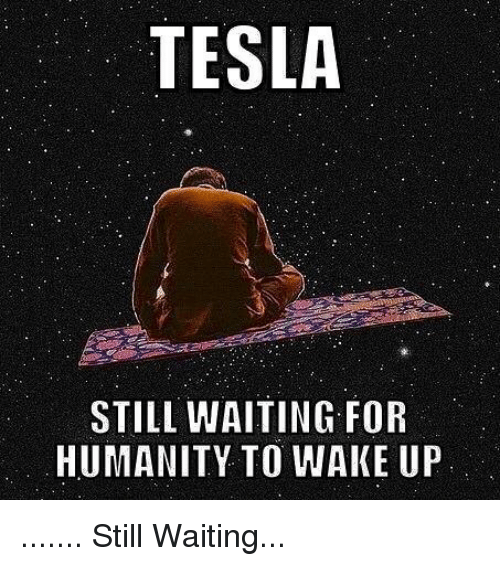 There is also an important connection between Nikola Tesla and Swami Vivekananda.

Swami Vivekananda familiarised Nikola Tesla on Vedic Science, Sanskrit terminologies, Samkhya theory of matter and energy during his trip to the United States in 1890s.

Nikola Tesla was highly impressed on the resemblance of the Samkhya theory with that of modern physics.

He could understand the esoteric Sanskrit terms and was convinced that according to him these are the only theories modern science can entertain.

He used these ancient Sanskrit terminologies to describe natural phenomena because sufficient interpretations could not be given in the English language.

Swami Vivekananda quoted the following in a lecture in India about Nikola Tesla:

“I myself have been told by some of the best scientific minds of the day, how wonderfully the conclusions of Vedanta are. I know of one of them personally, who scarcely has time to eat his meal, or go out of his laboratory, but who would stand by the hours to attend on the lectures on the Vedanta; for, as he expresses it, they are so scientific, they exactly harmonize with the aspirations of the age and to the conclusions to which modern science is coming at the present time.”

Coming back to the quote, “Waiting for the humanity to wake up”, what must be on the mind of this great human being as he was thinking on it.

Whatever it is, we have not yet woken up from our slumber to realise the ultimate truth to escape from this four-fold material bondage through right knowledge.

It is high time we realize it to work towards the ultimate purpose of life – Freedom from illusion, bondage and duality.